A unique manufacturing technique from Marc Quenneville combines vacuum infusion with rotational molding, which he says no one has thought of doing before.
The process completely eliminates the seam typically found in large composite structures such as aircraft fuselages, seaplanes, and submarines. These seams must be hand-ground and, worse yet, they weaken composite structures. In contrast, the new technique molds large monolithic composite structures using almost any moldable material such as thermosets, ceramic composites, and carbon-fiber reinforced plastics. Quenneville's patented prototype is intended to provide the basic concept for fabricators to build larger and more-elaborate versions of the production machines. He made the prototype from scrap plywood, 1-beams, and miscellaneous equipment lying around his boatyard. The outer shell if the prototype is a 4 x 4 x 8 ft  beam reinforced vacuum chamber made from several layers of plywood. Inside, a two-piece mold assembly (usually made from fiberglass) bolts together and rotates about an axis. To mold an aircraft fuselage, for example, the first step is to make what is called a "plug" of the fuselage. This entails using a CNC to carve out the shape from special polyester to within 0.0001 in. The next step is to hand lay-up the plug with fiberglass and slit the resulting shape down the middle. This produces a mold that is the negative of the original shape and smooth on the inside. A rubber bladder shaped like a fuselage (or any other structure) is covered with carbon-fiber preform and set inside the mold.
Sealant tape is then applied between the two mold halves and they are bolted together. Then a tiny hole is drilled in the mold. A vacuum pump sucks the air out of the chamber. Users pour resin into the resin reservoir, open the cocks, and the resin shoots into the mold due to atmosphere pressure. The resin can travel into the mold through the tiny hole, but the material's viscosity keeps it from escaping out of the mold. A motor rotates the mold to distribute the resin evenly. The bladder contains air and expands as the vacuum is created. This helps push the carbon fiber, now impregnated with resin, tightly against the inside of the mold for a clamping effect. After the carbon fiber fuselage sets-up, it is removed from the mold. Users cut out, say, the door, and remove the bladder. The process could change how composite structures are manufactured because the biggest problem until now has always been the seam, says Quenneville. "Composite is basically plastic and carbon fiber and bolts can crush the fabric, he says. "Every time a craft flies, the low outside pressure and the higher inside pressure makes all the fasteners try to leak. Most aerospace companies just keep making composite pieces bigger and bigger. Not one has thought to make a large structure all in one shot." Airline companies are scrambling to get the planes because they use significantly less fuel, adds Quenneville. Carbon fiber is about seven times stronger than aluminum, pound for pound, and it is lighter. Carbon fiber is also about three times stronger than steel, and, unlike aluminum, it does not fatigue. Quenneville's patent is #7,722,348. He can be reached at gyachts@tampabay.rr.com 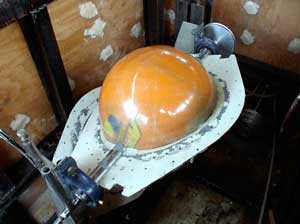 The finished monolithic fiberglass part (think of the ball as an aerospace fuselage sits in the bottom half of the mold). 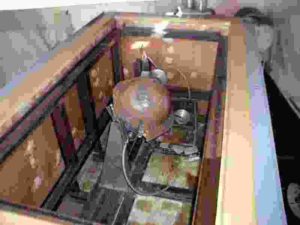 The rotational mold sits in the lower portion of the vacuum chamber. (The removable chamber top is not shown.)